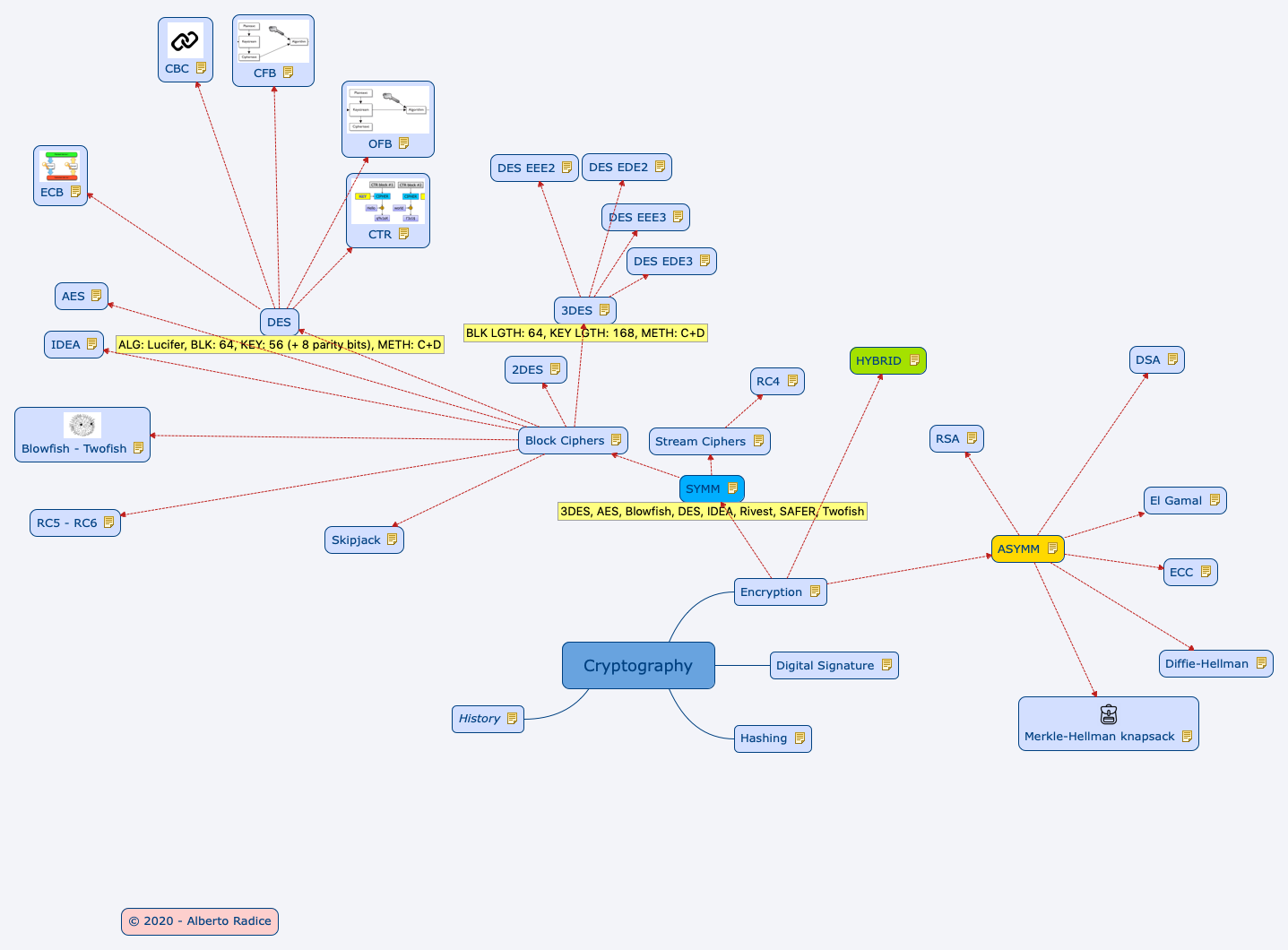 Confusion: each character of the ciphertext should depend on several parts of the key

Diffusion: if we change a character of the plaintext, then several characters of the ciphertext should change,

The Digital Signature Standard allows use of DSA, RSA, or ECC in conjunction with SHA-1 to produce secure digital signatures.

Kerckhoffs, 19th century - "Algo should be public, only key should be secret"

"Security of an algo rests in the key generation" - Bruce Schneier

based on quantum physics

It uses one-way functions which are easy to compute but difficult to reverse.

- It is possible to send a message across an untrusted medium in a secure manner without the overhead of prior key exchange or key material distribution.

- Asymmetric cryptography is extremely slow compared to its

- The ciphertext output may be much larger than the plaintext.

-measuring the running time of the decryption algorithm

Msg divided into blocks of bits

Some ciphertext created from the previous block is inserted into the next one.

Emulates a stream cipher and can be used to encrypt individual characters. Errors can propagate.

It turns a block cipher into a synchronous stream cipher.

COUNTER (CTR) turns a block cipher into a stream cipher.

It uses a counter as feedback. Errors do not propagate.

It is not more secure than DES. Same work factor to crack as demonstrated by the Meet-in-the-middle attack.

Designed as International replacement to DES.

It's at the base of PGP.

Uses prewhitening and postwhitening: additional subkeys are XORed into the text block both before the first round and after the last round.

It is a method of securely exchanging cryptographic keys over a public channel. It is not for encryption or decryption.

Asymmetric key encryption algorithm for public-key cryptography which is based on the Diffie–Hellman key exchange.

DSA is based on El Gamal.

A general ElGamal encryption produces a 2:1 expansion in size from plaintext to ciphertext.

The elliptic curve algorithms have the highest strength per bit of key length of any of the asymmetric algorithms.

Developed by the US government for digital signatures. It can be used only for signing data and it cannot be used for encryption.

Although intended to have a maximum key size of 1,024 bits, longer key sizes are now supported.

It is based on El Gamal.

Asymmetric cryptography can handle the initial setup of the communications session through the exchange or negotiation of the symmetric keys to be used for this session.

All practical implementations of public key cryptography today employ the use of a hybrid system. Examples include the TLS protocol which uses a public-key mechanism for key exchange (such as Diffie-Hellman) and a symmetric-key mechanism for data encapsulation (such as AES)

Multiple vulnerabilities have been discovered in RC4, rendering it insecure.

Particularly problematic uses of RC4 have led to very insecure protocols such as WEP.

It can be implemented faster than RSA, yet it was found insecure.